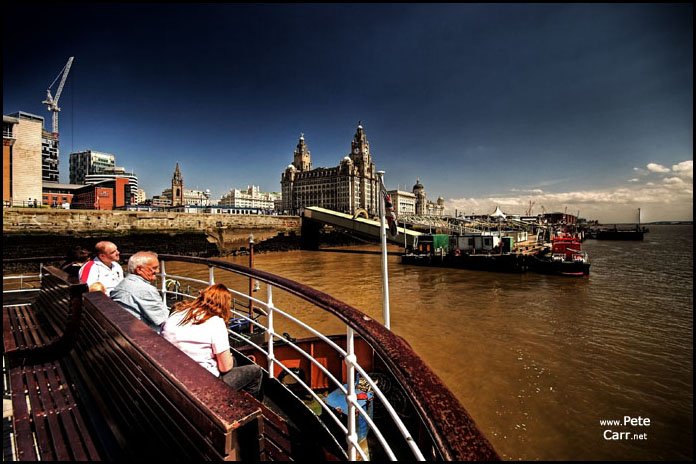 Recently I was invited to take part in a rather fun activity. The Liverpool Museum holds a large stock library of photos of Liverpool throughout the years and they thought it might be nice to get a modern take on them. They invited a variety of Liverpool based photographers to reproduce the photographs of Stewart Bale over a period of about 40 years. We were allowed to either try and reproduce the exact shot or do a modern take on it. Some photos would have been impossible to reproduce so people had to get creative. I chose to reproduce a shot of the Pier Head. I went out on the ferry on 2 occasions trying to get the right tide but it didn’t happen. In the end I came to the conclusion that any shot I do of the pier head would be a document of how it looks now. Due to the sinking of the current ferry dock the ferry now docks in almost the same spot as the boat in the shot did back in 1959. This was lucky for me as it allowed me to get a similar angle. The ferry was busy that day which helped get the people in the shot. I used HDR to make the photo a little different, a bit more modern. I figured why not. Its by a current photographer so I might as well show how technology has changed too. The difference in photographic techniques from 59 to 06. You can view the exhibit online at the Liverpool museum site.

As you can see the site has been redesigned again. The main reason for this is the switch from Moveable Type to Word Press. I’ve been wanting to do it for a while now. WordPress has many more features that I would use and its easier for me to add content to my with it. Its using the Durable theme which I modded into a photoblog theme. There might be one or two bugs in the system that I’m still tweaking but I’m happy with it for now. Also, in 1 months time this photoblog will be 2 years old. August 14th was the date it went live. Its only fitting that it gets a big upgrade.

Not a happy bunny