On Sunday 9th October 2011 I will run a marathon. The Liverpool Marathon to be precise. It’s the first one in Liverpool in over 20 years and I felt that I needed to run that for charity.

Pace chart can be seen below so you know where I’ll be and when. I plan to run on the left hand side of the road for the most part. I’ll be running on the right hand side down New Brighton prom. 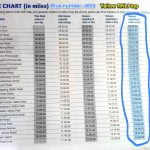 This is my RunKeeper profile where you will be able to watch my run live.

My girlfriend, Sam, stitched a message into a wrist band for me :) 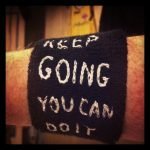 I’ve only been running about 2 years. I went from 0km to 5km to 10km to a half marathon and now a full marathon. I’ve lost 6 stone in weight doing this and found that I can do more than just take photographs.

That doesn’t matter though. What matters is that I’ve never used my running legs to raise money for charity, and for that reason I feel ashamed. Many people train and run a 5km race to raise money for something they believe in. I can run a 5km race any day of the week so I wanted to do a run that would really push me. I wanted to do something crazy in the hope that it inspired people to give for my charity of choice. I wanted to make up for all those times days I’ve ran a 5k without raising money.

My Mum died last year. I asked my Dad what charity she would want me to run for and he said the RNLI. I’m running for them and my Mum. I want to make them both proud.

The RNLI do great work in saving lives. There’s a station that I run past in New Brighton so it’s a charity that’s close to home. I see them training while I’m training. My parents strongly believe in them, as do I.
Please give generously. I was always the lazy kid at school who never did PE. I want to make up for all those years. I want to make up for not running 5k’s for charity. I want to make my Mum proud, and the RNLI proud.

If through running around a bit I can save lives then I’ll run around a bloody lot.

You can donate on my Just Giving page. Please share the link and please donate, even just Â£1.

Below are some of the people I’ve met during my training. They work for the RNLI. I’ve also discussed how my training has progressed over the months. Let’s just say it’s been very very tough.