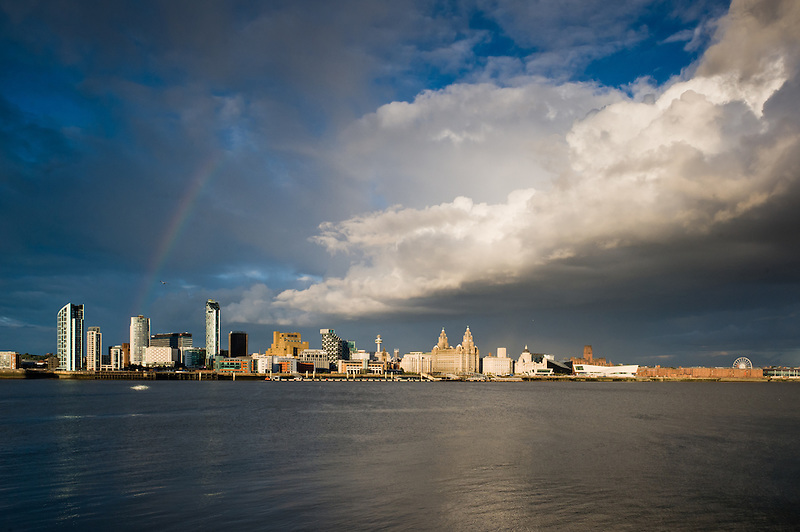 I take a lot of photos of the Liverpool skyline. It seems to change every 6 months so it’s good to document it. The other day there was some really deep blue clouds behind the skyline and the sun lit up the buildings. It was stunning. It’s a rare sight to see the skyline against a really dark background with the sun on it. Annoyingly by the time I grabbed my camera the deep blue clouds had moved on. Luckily a rainbow came out so that was nice.

The interesting thing about this photo is there’s no cranes. I think there’s been a crane on the skyline for the past 6 or 7 years. The black buildings at Mann Island are almost complete. The Museum of Liverpool is complete. The skyline has been vastly updated over the years as you can seen in the first photo in this series.

Speaking of the Museum of Liverpool, it opens tomorrow. The middle floor won’t be open just yet, but the main two galleries with the amazing views of the Pier Head and Albert Dock will be open. I’m guessing there’ll be a line to get in. It’s been a long wait but it’s been worth it. I can’t wait to go in and have a look at all the exhibits. It’s an whole new museum to explore. How cool is that? I’ve also been lucky enough to create a few large images for the museum. I think the largest is a panorama about 4 metres wide. I’m really honoured to be a part of it. The museum opens tomorrow at 10am by my friend’s son, Finn O’Hare. It’s a brilliant story. He wrote to the museum and said he was good at opening things so he should open the museum. They agreed. No big name celebs or anything related to the Beatles, just a kid from Liverpool who loves museums.