Skip to content
Press Enter / Return to begin your search.

Over the weekend my wife and I went to Birmingham for the UK Games Expo. We were mainly there for the world’s only live action video game called ‘The Dark Room’. It’s based on a 1980s text based adventure game and hugely entertaining.

While we were away Liverpool won the EU. Not enough to stop Brexit unfortunately. Football is many things but not magic. Although football with magic might be fun. I digress. When we heard that Liverpool had won we realised our train trip home on Sunday would coincide with every LFC fan trying to get into the city to see the victory parade. It got me thinking about the power of fandom. We had travelled to Birmingham to see something we loved and now people were travelling from Birmingham to our home city to see something they loved.

Our Birmingham to Liverpool train was packed. We were lucky to get the last 2 seats because at every station along the way more and more people got on board until the train was just abandoning people at the platforms. Red was everywhere.

Back in Liverpool I nipped into the Walker Art Gallery for a moment of calm. LFC fans were roaming the halls there too. I honestly did not expect people to be engaging with Pre-Raphaelite artwork before the parade. That’s not in any way to disrespect the average football fan. I know many fans who are way smarter than me and far more culturally aware than I am. I simply didn’t expect anyone to take the time for art before hand. I guess some people had travelled quite a distance for the parade and decided to make the most of the city while they were there. There was a father and son enjoying art and later sports. That’s great.

The waterfront was busy by 4pm. I got a ferry ticket in advance and planned to take photos until the last ferry at 7:30pm. Spoiler alert The parade bus would get to the waterfront at 7:20pm leaving me to sprint to the ferry so I wasn’t trapped by the 750,000 people all trying to get home after. It was busy. I’ve seen busy before at the 2005 victory parade where a guy tried to slip between my backpack and my actual back to get somewhere. That was bonkers busy. This wasn’t that quite yet.

But it was hectic. I saw people boarding the Brocklebank Tug, essentially piracy, to get a view. I saw a hoard of people take over a building site and climb cranes. People were throwing litter into the docks. It’s an impressive display of showing no respect while celebrating something you love. It’s almost like watching twitter privilege in real life. Maybe people don’t see beyond the players? Which is a shame because the team isn’t named after them. It’s Liverpool. It is city wide pride. Hell, I’m not a football fan and even I felt pride for the city that afternoon. So it saddens me to see such disrespect.

What made me happy was the community spirit I saw. I’m sure I saw people close to 100 years old. Kids were playing football. People of all ages were smiling and laughing. There was a real sense of a diverse community on the streets. That’s how things should be. Life is for all. Respect it. Enjoy it. Celebrate it.

It took the bus nearly 3 and a half hours to reach the waterfront. I somehow walked 10km looking for photos in that time. When the bus did arrive fireworks went off the tops of buildings. Flares went off in the crowd and everyone was elated. I photographed what I could and sprinted for the ferry. It was packed out. I thought I’d be the only one but it seemed like a good number of people had the same idea.

I sat down at the front of the ferry as it headed towards sunset and reflected upon the day, the weekend and what being a fan of something means. In primary school I was into football. Liverpool was my team. I had posters, sticker books and I was on the school’s B team for football. But looking back on it all I think it was just a way to cope with moving schools and needing to make friends. Unfortunately being an undiagnosed autistic kid meant I was terrible at sports with no idea why. I certainly tried because you don’t want to be the odd kid, the loser kid, the unusual kid. But I was. Left out and isolated for reasons I didn’t understand I retreated to my love of computers and stayed there for most of my life. That world made sense to me and I was good at it in a way that people didn’t understand. 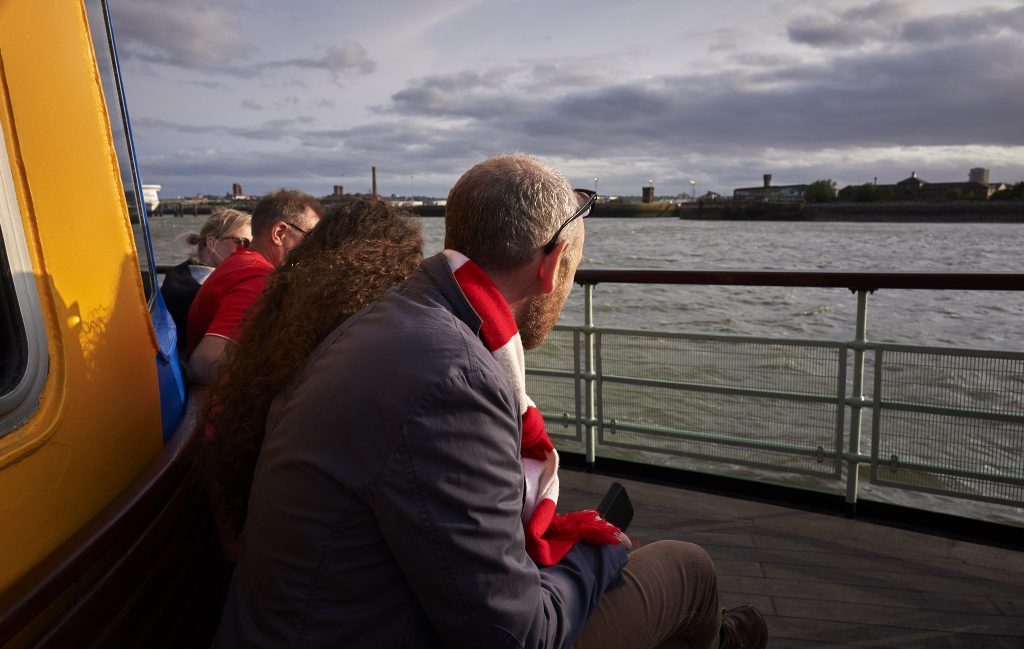 I’m honestly jealous of football fandom. Imagine being able to enjoy weekly event that brings people together. Something that unites people with international events. That constant weekly, if not daily, sense of community. It’s incredibly rare that I am able to enjoy that. Apple keynotes maybe. Going to a convention perhaps? There aren’t many events for me, the sci-fi loving video gamer photographer. 20 years ago I had it as I was part of a Quake 3 league. Weekly tournaments. But now it’s 12 episodes of a TV show and a chat about it with my wife on the morning walk to the ferry.

I often wonder if being autistic has robbed me of the ability to feel like I fit in anywhere and have that sense of community. There are fleeting moments but they are ever so fleeting. As I sat on the ferry home I thought about what it must have been like for everyone else on the ferry just now. The success. The pride. A years worth of ups and downs culminating in 750,000 people lining the streets of Liverpool to wave at their heroes.

What it must have been like to be a fan in Liverpool on Sunday.